Providing Honor, Hope and Healing to those grieving any military loss 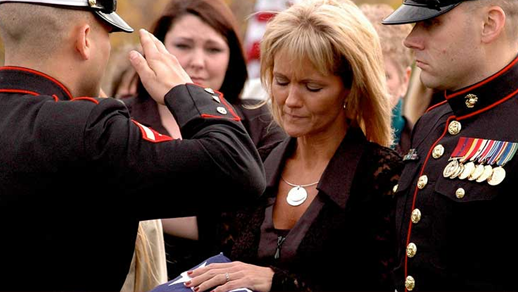 America’s Gold Star Families is a 501(c)(3) not-for-profit organization created to provide honor, hope and healing to those grieving any military loss through active duty service. We include all family members representing all conflicts, all branches of service and all circumstance of death.

America’s Gold Star Families honors our fallen heroes who served in the United States Armed Forces and cares for their survivors through programs and services at no cost to the survivors.

Many people are unaware of the significance of the Gold Star banner and its meaning. America’s Gold Star Families is committed to educating others on this important designation, how to properly respond when meeting someone who has lost a loved one in service to our country and advocating for their needs.

America’s Gold Star Families is governed by a Board of Directors which serves under the oversight of a Gold Star Advisory Council comprised of gold star family members and survivors. This is to insure the Board properly meets the needs of survivors adequately with appropriate protocol.

Patti Smith is a double blue star proud Mother of two US Marines who are now veterans. When her two sons enlisted in the United States Marine Corps within six months of each other, she received a crash introduction course into the military community. The emotional roller coaster of send off’s, boot camp graduations, writing letters, deployments, sending care packages, supporting other military families, homecomings—all occurred within a few short years. At one point both sons were deployed to Iraq at the same time. These life changing events altered the course of her life forever and while her sons now lead productive civilian lives, Patti serves as support advocate for Gold Star families and survivors everywhere. Along with their two sons, Patti have two daughters and several grandchildren.